Over the years, the Las Cruces Ukes have had to say the most difficult farewell to beloved members who passed away. We’ve decided to create this page to honor their memories and keep them a little closer to our hearts.

On March 9, 2019, the Las Cruces Ukes hosted a fundraiser concert for Mesilla Valley Hospice, in remembrance of our lost friends. We are proud to report that not only was a good time had by all (while a few tears were also shed), but we raised $2,227 for hospice! 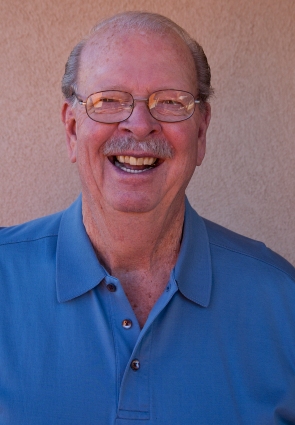 In truth, it could be said there would be no Las Cruces Ukes without Roger. It was he who suggested his daughter, Cheryl – now the Kahuna Grande of the Las Cruces Ukes, try the instrument and mentored her. Roger, Cheryl, and Las Cruces Ukes co-founder Kelle played together weekly and then decided to reach out to the community to form the club. But Roger had played the ukulele his entire adult life (along with a variety of other instruments), starting with a little Martin that was broken on a California beach! He was also a life-long member of the SPEBSQSA (The Society for the Preservation and Encouragement of Barbershop Quartet Singing in America), a competitive swimmer and water polo player, and a die-hard crossword puzzle solver. He made good use of his puzzle-solving skills as a winner on TV’s Wheel of Fortune. He was also a co-director of the Young at Heart Chorus and formed and coached the Cactus Chords Barbershop Quartet. All three groups performed for him at an Aloha Party two weeks before he passed away. 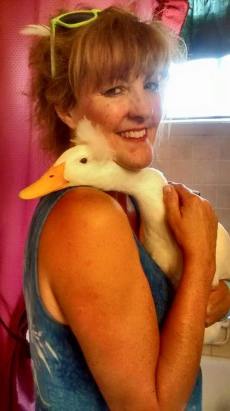 T.J. Diaz was an early member of the Las Cruces Ukes, bringing her sweet voice and love of all things Hawaiian to the group. She inherited a love for adventure, camping, and the outdoors from her family, which she shared with her children. As a teenager, she learned to pilot both glider and powered planes and was, at the time, the youngest person in New Mexico to fly solo. She was always there for anyone who needed a shoulder to cry on and a cheerful laugh was never far away. When she was not busy with her family, playing her ukulele, building a gazebo in the backyard, rescuing and raising a disabled duck, participating in the Senior Olympics in track and field or ballroom dance, she was likely involved with the youth group at her church. T.J. fought cancer for 11 years and passed away three days after a special at-home college graduation ceremony for her youngest daughter. Members of the Las Cruces Ukes were honored to perform one of T.J.’s favorite songs at her memorial service: I’ll Fly Away.

Beverly Jo Hale with her husband, Bob, were also early members of the Las Cruces Ukes. We didn’t realize when they joined they were newlyweds until we performed on Valentine’s Day 2015, their one-year anniversary. They were the ones who asked when the club would perform, taking us from a group of people who got together to play songs just for our own amusement to a performing group. She didn’t restrict her performing to the Las Cruces Ukes, but also performed with the Trails West Good Times Singers and the Trails West Karaoke. She and Bob loved the outdoors and spent many wonderful days fishing together. If they were absent from practice, it’s likely they were camping at one of New Mexico’s lakes or visiting family. She was always happy, positive, and loving. The last live musical performance she heard was a serenade by a group of Las Cruces Ukes members at her bedside at hospice.

Russell Ruiz’s beautiful voice was a gift to both the Las Cruces Ukes and our audiences. The song that became his signature solo piece was E Ku’u Morning Dew. He grew up as part of a Hispanic family in New Mexico, but a huge piece of Russell’s heart was captured by Hawaii. His hobbies included cooking and gardening. He managed the extraordinary by growing tropical plumerias in the desert! Russell also enjoyed spending time with his nieces and nephews and the rest of his family. We lost Russell to complications of COVID in the middle of the pandemic.

This is a text widget, which allows you to add text or HTML to your sidebar. You can use them to display text, links, images, HTML, or a combination of these. Edit them in the Widget section of the Customizer.
Loading Comments...
%d bloggers like this: